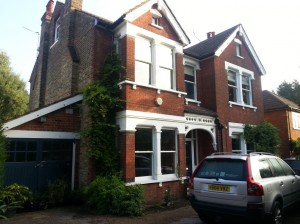 Maps of the Land and properties

Ownership of the Land and Properties

1842    Edward Baugh was the first name on a legal document relating to the house.

Interestingly, ownership is not always aligned with those resident at Blean House, I was able to find the following records of who was actually living here when:

Our house was among the first to be built in Victoria Road and consequently as more houses were added the numbering changed. Our house is called Blean House, but over time has changed from Number 2 to Number 4.

There are some gaps in the usage of Blean House, from the above you can see how the three plots on which the property originally stood have been sold off and then recombined. Each now has a property on it.

It was a family home from the time it was built until it was converted into bed sits and a flat in 1963, only to be returned to a family home by its owners in 1995.

When we moved into the property in 2000, there was a large pond at the bottom which we decided to fill in as we had very small children. Whilst digging at the bottom of the garden we discovered lots of dancing medals and badges and were advised by our neighbours that Blean House had been used as a dancing school for many years, presumably before it had been turned into bedsits in 1963. The through lounge (which is not particularly huge) was called the Ball Room!! Given the local presence of Bird College, I wonder if it had anything to do with that dance school.

In recent years additional land has been added to the plot (see above 1997) and the rear of the house has been extended and a conservatory added.

It is now, once again, a family home.