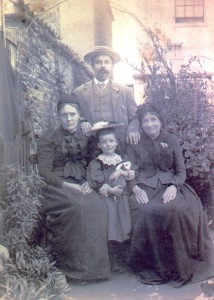 A photograph of one of the owners of the house, taken c.1895

Our small house, which could be described poetically as a Victorian cottage and prosaically as a “2 up 2 down” or 2 bedroom house, is part of a terrace of three, two storey houses.

From a research in the poor rate books for Bexley, we discovered that it had been built in the summer of 1849 and still unoccupied in 1850. The road on which it stands was then called Mill Road, after a wind-mill at the Eastern end of it. Both can be seen on the ordnance survey map of 1862.

A totally unrelated research about Wansunt Farm unearthed, in the same folder at the Bexley archives, the advert for a sale by auction on 6th July 1848, by Mr. T. Dann, including 6 plots on the south side of Mill Road, where houses were going to be. These plots were described as “a most desirable piece of land”. They were probably intended for the fast increasing population of Bexleyheath, then a new town on the outskirts of “Old Bexley”.

The original name of the three house terrace was “Elizabeth Place”, from the Christian name of the builder’s mother, Elizabeth Barham (c. 1781-1854), who was in charge of a pub, The Bricklayer’s Arms, further down the road, on the opposite side. The Barhams were a well-known local family of bricklayers, and the house was owned by them and their descendants at least until 1884. It was still a Mrs Charlotte Barham, widow of William, who was living at the other end of the terrace, at No 71, up to her death in 1989.