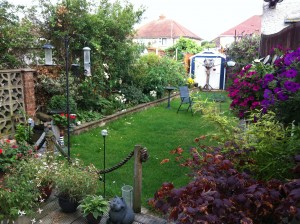 We live at 108 North Road Dartford Kent DA1 3NB.  The wall at the bottom of our garden is the Crayford and Dartford Boundary.

Dartford lies within the area known as the London Basin.  The low-lying marsh to the north of the town consists of London Clay, and the alluvium brought down by the two rivers – the Darent and the Cray – whose confluence is in this area. The higher land on which the town stands, and through which the narrow Darent valley runs, consists of chalk surmounted by the Blackheath Beds of sand and gravel.

This area to the south-west of Dartford covers some 314 acres (127 ha) of open space.  Historically it has always been of importance: prehistoric barrows and Bronze Age artefacts having been discovered here.  The first recorded cricket match took place here in 1723; and the Society of Royal Kentish Bowman were briefly established here between 1785-1802. The nearby area is still known as Bowmans.

The Heath is an official Area of Outstanding Natural Beauty.  It contains three ponds (Donkey Pond, Woodland Pond and North Pond) and a variety of habitats.  It is common land and therefore escaped being enclosed during the late 18th and the early 19th centuries.  It is also the original source for the name of the Dartford Warbler.  Dartford Heath is used as a local recreation area (particularly for cyclists) and dog walking area

What was there before our house?

It would appear, not a lot!

Up until the early part of the 20th century, our house was part of the Heath Farm Estate.  The Farmhouse still exists in Heather Drive.  My parents live in Heather Drive and it is where I grew up.  The gardens are full of fruit trees from the old orchards

The 1930’s were a time of great change for Dartford, encouraged by the pride of becoming a Borough with its own Mayor.  It received its Charter of Incorporation in 1933.

One of the most important changes was the rapid development of new housing estates, particularly in West Dartford.

In 1931, the first houses to be built on the Heath Farm estate were being advertised for sale as “residences of character and distinction” with three bedrooms, large gardens and garage rooms.  They were specially designed with the view of small upkeep, combined with labour-saving devices to ease the lot of the housewife.

The houses were advertised for sale at the bargain price of £650 freehold.  With a deposit of £35!

We placed our test pit towards the bottom of the garden, hoping to miss any builder’s rubble from the house.  Living so near to a major Roman Road, we were expecting at least a mosaic floor or a Bronze Age barrow, which have been found on Dartford Heath!

Dirt and a few stones

All modern finds, in a complete jumble.  Nothing in situ and it would appear that this material was brought into our garden.

Again, nothing in situ.  All finds were randomly mixed into the stony soil.  Hard digging!

We only excavated a quarter of the test pit to this level because it looked like natural gravel and grit which we expected.    Upper layers were dirt and stones.  Gravel has been extracted from nearby Dartford Heath for hundreds of years.  No finds were found in this level.

Although we didn’t find the mosaic or the barrow, we found what the historic records implied we would find.  Not a lot!  It has been open farm and heath land for hundreds of years with natural grit and sand at lower levels.

We all enjoyed doing this project.  The best bit was digging the test pit. When we found the GMB badge and the bristles from a broom, I thought we had a buried road sweeper on our hands.

But I also enjoyed revisiting the history of Dartford, which I am sure I learnt at primary school and had forgotten over the years.